No PH this week due to the nasty cold going round.
So that ruled out Pandemic and Trains.
Quarriors! and Small World were the top voted games this time around.
We went for Quarriors! 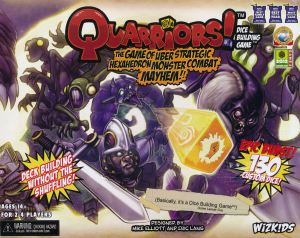 MC – Green
PM – Red
PN – Black
PN kicked off and, despite being new to the game, went on to a comfortable win.
Card were redealt, MC kicked off and PM, despite being new to the game, won round 2 – the Victory Incantation doing very nicely for him and attained quite early on (the only roll of 9 that game).
PN announced a desire to play something different in the time remaining so Fluxx was called forth. MC chose the original version.

Two rounds were played with MC winning both (ironically with the same Goal – having 10 cards in their hand).

No PM this week, citing unwellness.
2 new games this time:

Kicked off with Eketorp
MC – Purple
PH – White
PN – Red
A new one for all of us, got the idea of the rules pretty quickly.
Decided to do a battle card reshuffle as we all had 4 or 5 powered cards. Led to a lot of draws and not much progress. A better arrangement of cards on the reshuffle.
MC got hammered by PN early on and was mostly ineffective in retaliation. PH and PN used sheer numbers to dominate and acquire their bricks. No one manage to complete their castle by the end of the tenth round and PN and PH drew in first place until PN recounted and found themselves in first place. Well done PN.

Had a crack at Cthulhu Gloom, struggled with the wording in the rules around hand limits and draw limits but eventually got there.
MC managed to kill off their family first and had the lowest points along with PN, who had the sneaky score-even-if-you’re-not-dead story card. PH came a respectable 3rd.