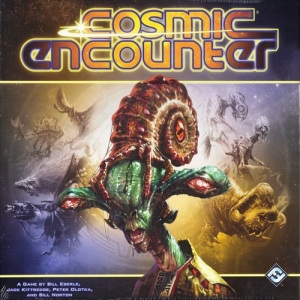 Played Cosmic Encounter which had the most votes at 2.
3 players this week.
MC took on the guise of the resourceful Reserve.
PM did dealings and wheelings as a Trader.
PH dazzled all as the Oracle.
All from the green deck – despite all 3 colours shuffled together.
MC kicked off and pretty much dominated most of the game. However, overexerted himself and ran out of puff for the last push. PM and PH closed the gap and the game ended at 4-4-5 with PH taking the win by attaining 2 points on their final go. A stunning performance there.
Most players were able to utilize their alien powers, though MC forgot about the secondary bit and PM had some unfortunate hand-swapping experiences. The all-seeing Oracle certainly had the strongest power in this game. Through a technology, MC did acquire a second alien power – the Sadist, but got nerfed when he lost his 3rd home colony. PH acquired the Lunar Cannon, which did him very nicely.
PH wasn’t sure he like the randomness of it. He says he needs to play it again to help him decide if he likes it or not. Certainly, we felt it would have been better with more players – not for the lack of trying!