MC kicked off with Heroic Humans who suffered at the hands of PH’s Berserker Gypsies and PM’s Dragonmaster Elves. Imperial Kobolds took over where the Heroic Humans left off and had a short but impressive innings. After falling foul of the Dragon, the Gypsies moved on and Barbarians rose from the Underground and caused much ruckus. The Elves departed to the Undying Lands to make way for the Merchant Goblins who were stuck between a Kobold and a Barbarian place.
The battle concluded with the impressive Forest Shrubmen holding every Forest region, the Fireball Dwarves torn between getting more fireballs or points and the Hill Fauns failing to get many hills or Active Regions to conquer.
Final scores PH-99; PM-102; MC-115. 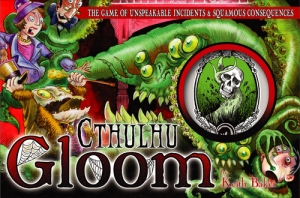 Lots of time left so Cthulhu Gloom was summoned forth and brought out of the box for the second time this evening. Two games played.
Game 1 saw much forgetting to read the card rules or knowing what the Moon symbol looks like. PM managed to kill off their family first with the final scores being: PH-10; MC-70; PM-75.
Game 2 was a much quicker round with PH making up for a poor last round by dispatching family members with reckless abandon. Final score: MC-55 (with only 1 death); PM-90; PH-95.
Everyone won something tonight, so no going griping on this blog.

#HarryvHalloween part 2.
Now trying to get our heads round #Kahuna (@kosmos_games) on @BoardGameArena. We think we now understand why bridges keep disappearing. #GamesNight
Next up we tried #ClashofDecks (@grammesedition) on @BoardGameArena. It felt a lot like Order & Chaos. Wondering how this would play IRL.
Next up for 2-player #GamesNight on @boardgamearena is #BubblePop (@bankiiiz_editions).
Playing #Santorini on @boardgamearena (@roxleygames) to kick off a #GamesNight with 2 players. What 2-player games work for you.
October 1st started like any other day for Harry. He got up, brushed his teeth, pulled on his tunic and went out with his trusty gardening fork to work up an appetite before breakfast turning over the soil ready for winter