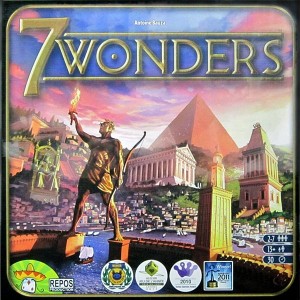 A big welcome to JR.
The evening saw JA turn up first and so we played Fluxx to pass the brief time before PH turned up with his train games. He joined in and didn’t get a go before MC won (Peace not War). Round two saw PM and JR make an appearance. JR commented on how he hated Fluxx because of its randomness in winning when PH randomly won.
7 Wonders was the game of the night, PM’s Christmas prezzie.
After a lengthy run through of the rules, the game commenced with overall low to average scores being the end result. JR won, though he has played this before. A second game was deemed worth embarking on, and Stage I went rapidly until it was realised that the 6 and 7 player cards had been shuffled back into the deck. The current play was allowed and the rest of the deck was discarded. With a better understanding of the game, we were able to focus on more rewarding goals. PH and JR became Military Super Powers whereas JA and MC went for the more learned direction. PM was all for straight up points. This didn’t do him much good. The end result saw JA and MC in the high 50’s with 58 and 59 points respectively.

Condolences go to PM who felt a bit put out he didn’t get to win his new game tonight.