Three of us this week.
As we played McMulti last time, it seemed appropriate that we played Power Grid this time.
Particularly as MC spent the weekend doing some carpentry and redid his games cupboard for better use and ease of access. PH kindly provided Power Grid for this evening’s entertainment.
A different game than usual in that some decent power stations came up early on and were happily snapped up. Unfortunately this meant that the rest of the game, few were purchased as they were pretty rubbish.
PM found himself hemmed in like MC was previously so bided his time building up a nice wadge of money. When round three finally dragged itself into play, PM certainly did get the opportunity to place every single station he had. As did PH and MC but one (he had an extra 2 for some reason). All this was for nought, as PH had to power stations to provide 13 cities, MC 12 cities and PM 11 cities. Well done PH.

4 of us this week. A perfect number for: 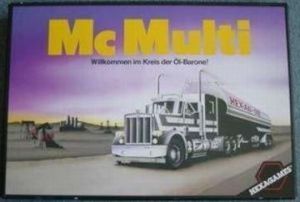 A new one to JA.
Due to a potential Gas Station charge being the first double-related incident, the initial purchases were particularly Gas Station light.
JA had particular issues striking oil, and having enough cash to by a pumping station when he did.
Very few doubles were rolled this game, which saw an early rise to near maximum on the international market and then a gradual fall to peanuts. At the same time, the particular doubles rolled kept inflation high, so the cost of purchasing further installations was crippling. Any profit made selling petroleum was lost buying extra gas stations. By the game’s conclusion, all four islands were pretty well stocked with installations.
MC was the one who finally made it to the $1,000,000,000 mark first. After selling everything (at Prosperity prices) the final scores were:
JA: 1.5 Billion Dollars
MC: 2.06 Billion Dollars – For the win!
PH: 1.96 Billion Dollars
PM: 1.76 Billion Dollars
So no one went bankrupt, though all made a loss on those Gas Stations.

JA kindly brought with him: