Four of us this week.
Kicked off with the DA’s copy of the infeasibly popular cooperative game of

by Zman Games.
DA was the Quarantine Specialist
KV was the Medic
MC was the Operations Expert
TS was the Dispatcher
MC started and quickly set to building Research Stations and flying off to Asia. DA also made his way to Eastern Europe where a large accumulation of the black disease was spreading. KV too found his way to Asia to stem the flow of the Red disease. TS followed suite.
By this time at least four epidemics had happened and a few outbreaks had … erm … broken out. Yellow, red and black were looking very threatening. Blue was doing not much at all.
After a clever bit of personnel management, DA held 5 red cards and was at a Research Station. KV very quickly eliminated the remainder of the Red while MC, DA and TS tried to tackle the Yellow and Black. Blue still wasn’t doing much but sat quietly in London.
With only one outbreak away from failure, we had the board under control. The London had an outbreak.

Next up we played

KV utilised the Elves mana strength by going all-in on mana for his starting resources. This quickly paid off for him and he remained a powerful player throughout the game. DA also focused on building up a strong mana stockpile. MC and TS tried to do stuff in the game. There was only two brief scuffles, otherwise this was a largely peaceful game.
KV triggered the endgame by attaining level 5 magic. MC followed him with this achievement.
Final scores:
DA: 15
KV: 17
MC: 15
TS: 9
Well done KV! 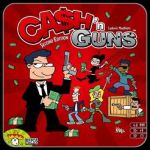 by Repos Production.
We very quickly got the hang of this speedy and fun game and the bullets were soon metaphorically flying.

DA stood up to one bullet too many and died a death of being shot a lot.
TS was next to bite the bullet, but did wound MC before he did so.
KV and MC were left to face-off against one another with KV being unsuccesful in shooting MC at all.
MC was the victor with over $300,000.