How to play
The object of the game is to win. Winning is achieved by being the first player to control two battlefields (or 3 in a 3+ player game).
Either randomly or by selection each player chooses a Player, Lineage and Domain deck and matching character standee.
After separating out the 3 skill cards, the 40 remaining cards are shuffled to create the grimore (main deck).
The deck is placed on the player’s board along with a blue bead on the 6 of the energy tracker and the red bead on the 6 of the turn tracker. Each player also gets 1 Omen token in their omen pool and the first player get the Fate token.
The skill cards are placed next to the board for player reference.
In a two-player game, three battlegrounds are placed between the players.
In a three + player game, one battleground is placed between each player. The base game allows up to four players. Each battleground gets 2 red cuboids which start off in the middle (an extra counter may be needed in a four-player game).
Certain decks also come with their own special card (i.e. Blood Card or Moon Phase card) which also need to be separated out and put in a place of reference.
Each player deals themselves 6 cards. They may mulligan.
Each player places their avatar in a battlefield, the abilities of their three skill cards will only affect that battlefield.
The Action Phase
Starting with the first player, each player takes turns to perform an action.
To perform an action a player must first spend 1 red action point (move the red bead down the track by one). In this way all players will get to perform six actions.
The actions are:
– Play a card from hand: Each card has an energy cost and must be paid by moving the blue bead down the energy tracker by the requisite number. Spells are played straight to a player’s personal graveyard (discard pile) and actioned accordingly. Minions are played to any battlefield (in a 3+ player game minions can only be played to the battlefields to the left and right of the player and spells can only effect those battlefields). Items are played to already played minions.
– Move a minion: A minion can be moved from one battlefield to an adjacent battlefield (some minions have flight and can move to any legal battlefield).
– Gain two energy: Move the blue energy bead up two spaces.
– Gain two cards: Pick up two cards from the grimoire.
Once all players have performed all six actions the action phase is complete.

The Battle Phase.
Starting with the battlefield on the first player’s left, minions battle one at a time until all minions have battled or been destroyed. In a two-player game, the first player gets first attack in the middle battleground only.
All minions have an attack and defence score. To attack, a minion is tapped (turned sideways) and their attack value is counted (their red value + any extras). That many dice are rolled to determine damage (up to 7 dice). Die rolls can be:
-Blank (a miss!)
-1 skull (a hit!)
-2 Skulls (a double hit!)
-1 star (a critical hit! – or a double hit if the Battle Phase commenced with no opposing minion on that battlefield).
Both players involved in the battle can spend an Omen tokens to force die rerolls to better or worsen the roll outcome. The first player may also flip the Fate token to force a complete reroll (but only once per turn).
Damage done can go to any opposite minion or to the battlefield. The attacking player only gets to choose where damage from a critical hit goes – all other damage is decided by the defending player.
Damage counters are added to minions one at a time to denote damage. If damage = minion defence (the blue number) the minion is destroyed and sent to the graveyard with any items it was carrying.
Damage to the battlefield is indicated by the red cuboid and is placed on the tracker on the defender’s side of the board. When the damage reaches 12, the battlefield is completed and turned over with a red cuboid on the victor’s side. When a player has 2 such victories, they win. In a 3+ player game, the battlefield is reset and the first to win three victories is the winner.

Further Thoughts
The main issue with this game is the demonic theme which will limit who will actually play this with me. I know many of you will scoff at this or not even think this is a thing, but for some, this is a real problem.
Apart from that, this game plays a bit like Smash Up, with the similar deck mixing mechanic and battleground break point goal but with a much better focus on the combat. The Omen token mechanic makes for some interesting extra strategy choices where a player may play a weaker minion purely to increase their Omen stash. The order of battle turns on the battleground also keeps players thinking about what should go where, and when.
As I’ve mentioned above, the artwork isn’t to my taste, but I can look past it to enjoy the simplicity and complexity of the game.
I feel it’s a stronger game as a two-player, but am grateful for the adaptation to accommodate extra players. I’m glad I got it with the extras and will keenly keep an eye out for more.
Final Verdict: Add this to your collection!

Expansions
These came with the Kickstarter but will probably be available as expansions too:
Each of the Character Packs comes with a deck of 10 cards, a Character Skill card and an Avatar Standee. The bases are small but can be swapped out for the extras supplied in the base game. 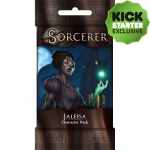 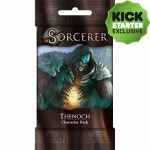 Each of the Lineage Packs comes with a deck of 20 cards and a Lineage Skill card. Both these packs come with extra rules and counters.

Each of the Domain Packs come with a deck of 10 cards and a Domain Skill card.

The reverse of the player boards features an Egyptian theme – they play exactly the same regardless, but three matching battlefields were made available. I declined having spent enough, but I’ve heard they don’t fit too well in the box.
3 Egyptian Battlefields with red cuboids.