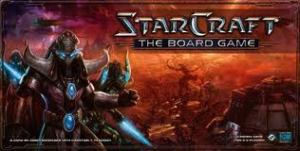 Going to cheat here and use my entry on Amazon.co.uk
At first glance, this game is a bit complicated. A further look does not change this fact. If you like your games quick and easy to learn, set up and play, this is probably not the game for you. If you are keen on having millions of pieces, tokens and cards then this should be right up your street. The 50+ page rulebook makes for some heavy reading and even then several rules are easily overlooked – some are summarised on the reverse of the rulebook.
Those who are determined to get the hang of it, however, should find their efforts are well rewarded.
The playing pieces are excellently made and capture the real essence of the units from the computer game. All the buildable units (non-hero) from the original computer game (not Brood War) are present – except for the Protoss Observer and the Zerg Infested Terran. The Zerg Broodlings, and Terran Spider Mines are represented as cards and the Terren SCV & Dropship, the Zerg Overlord & Drone and the Protoss Shuttle & Probe are represented as tokens. The main complaint I have is that the aerial units are set on transparent stands that break easily, I have already had to repair one of my Protoss Arbiters. My Terran Ghosts also look decidedly drunk! I have heard of some people opening the box for the first time and finding a few breakages.
A note to the unnitiated: you do not need to know anything about the computer game to play this well.
A quick summary may help, however:
You can choose to play one of three different alien species. Each species is very different to the other in terms of abilities and tactics needed to win. They are all balanced to be evenly matched but experience is needed to know which tactics to use against which enemy units.
The Terrans (Humans) pack the hardware with tanks and battleships, the Zerg (insect-like things) have superior numbers, and the Protoss (advanced beings) have technology and mental prowess.
Each species is represented by two factions who have different goals.
Each player supports two planets, which make up the game board. So the board will range in size from four planets in a two-player, to twelve planets for a six player. You do need a large playing area for the larger games.
Turns are comprised of building, researching and moving (fighting) with the purpose of being the first to achieve one of three goals: Score 15 points; Achieve your faction’s goal; Eliminate everyone else and be the last man/beast/entity standing. The third goal is rarely achieved as one of the first two normally happen first.
Effective resource management is paramount and the tactics require you to sometimes plan a move several turns in advance.
A two-player can be completed in under ninety minutes, whereas a six-playey may take over three hours. Double these times for elimination rules (be the last man standing).
I love the computer game and love the board game as well. I can see some of those familiar with the computer game, however, may be a little put out by the alterations some of the units and buildings have undergone for the board game.

#HarryvHalloween part 2.
Now trying to get our heads round #Kahuna (@kosmos_games) on @BoardGameArena. We think we now understand why bridges keep disappearing. #GamesNight
Next up we tried #ClashofDecks (@grammesedition) on @BoardGameArena. It felt a lot like Order & Chaos. Wondering how this would play IRL.
Next up for 2-player #GamesNight on @boardgamearena is #BubblePop (@bankiiiz_editions).
Playing #Santorini on @boardgamearena (@roxleygames) to kick off a #GamesNight with 2 players. What 2-player games work for you.
October 1st started like any other day for Harry. He got up, brushed his teeth, pulled on his tunic and went out with his trusty gardening fork to work up an appetite before breakfast turning over the soil ready for winter